Show us your photos of work, life under COVID-19

27 Mar. 2020. While the COVID-19 pandemic enormously disrupts the lives of National Press Club members and staff, along with most everyone else worldwide where the virus reaches, the Club's Photography Team is asking members to help document this unique moment with your photos of working and daily life under the threat of coronavirus infections.

Your photos can show how you're coping with remote work, such as your home office or studio set-up, video conferencing, juggling family life with work demands, and even your hand washing routines. And when you can venture out -- keeping a safe six-foot distance from others, of course -- show us the empty streets, Metro stations, or store shelves you've encountered, people helping their neighbors, or other scenes we will not likely see again for some time.

You can use any technology to capture the photos: your phone, a screenshot, point-and-shoot, or digital SLR camera. Please send your best images by email to members@press.org. Be sure to include a brief caption and credit for each image. Club staff will periodically post photos they receive in a gallery on the press.org web site.

And feel free to share the images in your own social media feeds. Please remember to tag @PressClubDC on your Twitter and Instagram posts. Recommended hashtags are #CoronavirusNPC, #NPCsocialdistancing, or #NPCstayathome. Questions? Contact Photo Committee co-chairs Alan Kotok at alankotok@gmail.com or Cheriss May at cheriss@cherissmay.com.

The NPC’s annual photo exhibit is on display in the Club’s lobby through September 27. Broadcast/podcast co-vice chair Adam Konowe spoke to photo team co-chair Alan Kotok about the evolution of the exhibit and its relevance in today’s critical society.

Konowe also interviewed Aileen Schlef about her photos at a Washington, D.C. church, as well as Molly McCartney, who captured life in Syria before the civil war. Both photographers discuss how the photos were taken and the stories behind them.

Two of the entrants use print photos and electronic images to tell their stories about the Syrian civil war.

The exhibit displays images and print photos by Flavius Mihaies who documents his visits to Damascus, Homs, and the Kurdish-controlled region in northwest Syria in 2015, and earlier volunteer work in refugee camps in Iraq. Yet there was a thriving and peaceful Syria before the war, which Molly McCartney describes in her print photos and images from 2010, including an image from Palmyra, a community with ancient ruins later largely destroyed by the Islamic State.

This year's exhibit offers 37 print photos and 130 electronic images from 42 Club members. For the first time, the exhibit has an online catalog, where photographers tell more about their photos and images, including stories by Mihaies and McCartney describing their entries about Syria. The catalog also provides links to related work by participants, including blog posts by Mihaies for the World Bank and Atlantic Council, and McCartney's video for The Jerusalem Fund.

The exhibit shows behind-the-scenes images by Bloomberg's Derek Wallbank from the truncated summit in Hanoi between Donald Trump and North Korea's supreme leader Kim Jong-un earlier this year, and a photo by political journalist Robert Yoon of North Korean soldiers patrolling the Demiliarized Zone in March 2018, with stories about these images in the exhibit catalog.

The exhibit and catalog feature an image and story by broadcast journalist Victoria Gaither from New Zealand following the mosque attacks in Christchurch, and a photo by Andrew Schneider of Air Force One, renamed Special Air Mission 41, carrying the body of former President George H.W. Bush back to Houston. The catalog includes a link to Schneider's report for Houston Public Media.

And the exhibit has many photos and images from Washington, including photojournalist Christy Bowe's work at the Trump White House and Capitol Hill, as well as shots of Club events by Darlene Shields. The exhibit also visits St. Anselm's Abbey, a Benedictine monastery in Northeast Washington, where Aileen Schlef describes in images and words the ordination of a new priest.

This year's exhibit offers a number of photo essays, where participants link their images together in a single narrative. Among the most compelling is a photo study of a homeless man living under a bridge in Paris, from Diane Stamm who writes for Bonjour Paris. Stamm says the man once raised cattle but lost his livelihood when a road was built through his farm.

The exhibit continues through Sept. 27.

Here's your chance to display your top-quality print photos and electronic images at the 20th annual members' photo exhibit in the National Press Club's main lobby.

The photo team will accept your submissions from Aug. 1 to Aug. 16,. You may submit up to two print photos and four electronic images for display.

The annual exhibit is a celebration of visual storytelling by Club members. The exhibit runs from Aug. 30 to Sept. 27. It's not a contest. No judging takes place nor are prizes awarded.

In the print exhibit, each photo is hung with Velcro on fabric display panels. All entries must be securely mounted; no loose photos are accepted. The maximum size of each mounted photo, including mat (if used) can be 11 by 14 inches. No glass, frames, or canvas prints are permitted. Most photos in the print exhibit are mounted on either lightweight paperboard or foam-core.

Paperboard is a thin stiff piece of cardboard, with the photo held in place by a mat, a paperboard window placed over the picture. A mat also provides space for title, description, and signature. This video shows how to mount and mat a print photo. Dry mounting on foam-core can also be done yourself, with a little help from your friends, as seen in this video. If using foam-core, leave a little extra space for title, description, and signature.

Some members prefer to use commercial services to mount their prints. Here's a list of DC-area photo printing services from Exposed-DC, a Washington photography web site.

The annual members' exhibit also features a display of electronic images, with up to four entries accepted as well from Aug. 1 to Aug.16. And starting this year, exhibit participants can tell more about their photos and images in an online exhibit catalog. Full rules, instructions, and schedules for print and electronic entries, and the online catalog, can be downloaded from the Club Photography Committee's web page.

National Press Club members can now download rules and guidelines for the twentieth annual members' photo exhibit. The exhibit showcases Club members' best print photos and electronic images, and for the first time lets participants tell the stories behind their photos and images in an online exhibit catalog.

Members can find the exhibit rules and guidelines on the Club Photography Committee's web page As before, participants can enter up to six pictures for the show, two print photos and four electronic images. The event is an exhibit, NOT a contest. There are no judges nor juries. But we ask members to enter their best high-quality work, displaying special people, moments, events, or places, not entered in previous exhibits.

Print photos will be mounted on display panels in the Club's main lobby from Aug. 30 to Sept. 27, 2019, along with large monitors showing electronic images in continuous slideshows. The Club has a new display panel this year with space to hold more print photos. As before, members can submit up to two print photos fixed on sturdy, lightweight materials, which will be attached to the panels with velcro. The rules and guidelines provide detailed specifications for the print photos, as well as the delivery process.

Also new this year, members can tell more about their print photos and electronic images in an online exhibit catalog. The electronic image entry forms have added fields to capture this information. And members can provide links to galleries, news stories, podcasts, or videos related to the entered photos or images. Print participants can also tell about their photos in the catalog on a separate online form; the rules and guidelines explain how.

Participation in the online catalog is optional. If you just want to enter your print photos or electronic images, that's fine. Technology News and Literature is also preparing the online exhibit catalog.

In addition, the rules document provides the key dates and deadlines for the exhibit. One of those key dates is the exhibit's opening gala, on Friday, Sept. 6, celebrating the 20th year of members' photographic story-telling.

Tell your story in the 20th annual members' photo exhibit

National Press Club members are among the best story-tellers anywhere, and this year's photography exhibit will give members a way to show it. The exhibit runs from Aug. 30 to Sept. 27 in the Club's 13th floor lobby, and has new features for members to tell the story behind their best photos, as well as display the photos themselves.

Entries for the exhibit are accepted beginning on Aug. 1, so members should start going through their collections to find those images that capture special moments, times, and places. As done the past few years, the exhibit will display both print photos and electronic images, with up to two print photos and four electronic images accepted. And as before, any photos or images displayed cannot be repeated from earlier exhibits.

This year's event, the 20th annual photo exhibit at the Club, adds a new way for members to tell their photo stories. It features an online catalog where participants can tell a little about themselves as well as the stories behind their photos. And the electronic exhibit catalog will also let members display links to online stories, galleries, podcasts, videos, and social media posts related to their photos.

The Club's Photography Team that puts on the annual show will provide online forms for members to readily enter all of this information and upload their photos. Participation in the online exhibit catalog is optional. If members just want to show their photos, that's fine. But all participants are asked to let their social media contacts know they're taking part in the exhibit using the hashtag #NPCPhotoEx.

There's another new feature this year for print photo exhibitors, a new display panel offering room for more entries. Full exhibit rules and guidelines will be posted next month on the Photo Team's web page.

Welcome to photography at Technology News and Literature

Pictured: Michael A. Taylor of the Washington Nationals hitting a home run against the Cincinnati Reds, 25 June 2017.

Alan Kotok is an amateur photographer, co-chair of National Press Club's Photography Committee, and a volunteer photographer at NPC since 2018.

Most photos are available from SmugMug and Flickr.com, and carry a Creative Commons/Attribution license. 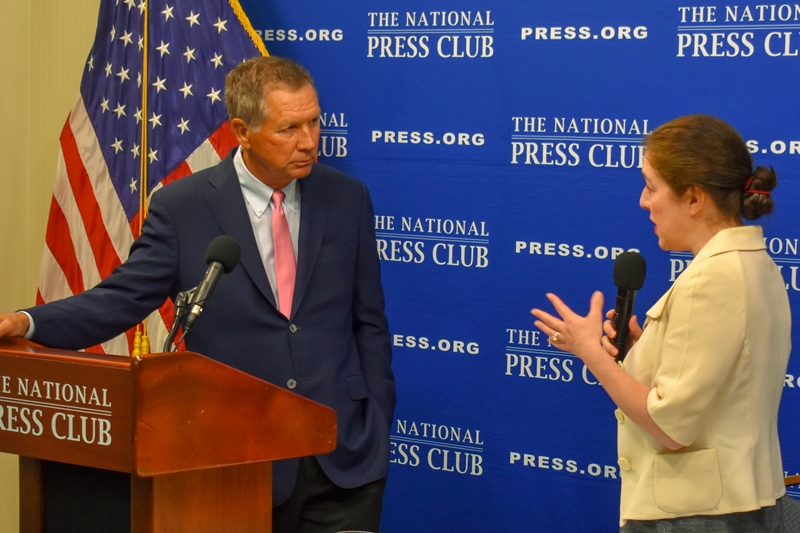 Alan Kotok began as a volunteer event photographer in March 2018. Here's a list of NPC activities shot that year, and links to their galleries on Smugmug. Shown: Gov. John Kasich of Ohio and National Press Club president Andrea Edney, 12 July 2018.